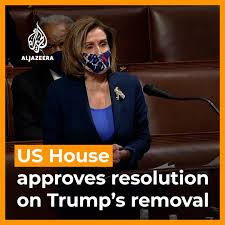 US House of Representatives approves removal of Trump from power

On Wednesday, the Democratic-controlled US House of Representatives unanimously voted to approve the removal of outgoing President Donald Trump, after the chaos caused by the storming of Congress.

This is the first time in the history of the United States that votes on procedures to remove a president for the second time during his presidential term.

CNN reported that 232 council members voted to impeach Trump, in exchange for 197.
Ten lawmakers from Trump’s Republican party voted for impeachment alongside Democrats, according to CNN.

The impeachment decision accuses Trump of “inciting rebellion” for his role in the deadly riots in the Congress building last week.

Trump will remain in office and will likely end his term as it takes a conviction from the Senate to remove him.

Previously, Trump supporters stormed the Capitol building, which led to the suspension of the work of the Senate, which was in the process of debating the results of the electoral college.