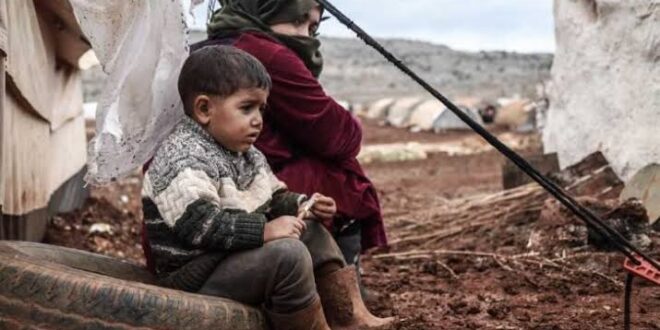 The German “Relief of the World Hungry” organization said that ten years after the war in Syria, the country is suffering from the worst hunger crisis so far.

The Coordinator of the Relief Organization in Syria, Konstantin Fitchel, told «German News Agency» that there is a «warning record», more than 12 million people do not have enough food, about 60 percent of the total population, adding that the humanitarian situation has generally deteriorated considerably over the past year.

According to the data published by the organization, the most affected are the displaced, as the coordinator who visited the city of Azaz, north of Aleppo, indicated that “the situation in the camps is appalling,” explaining that winter temperatures and heavy rains increase the suffering of people severely at the present time.

He also pointed out that there is a shortage of everything in the refugee camps, and he said: “During our visit, we met 30 children who were only wearing jackets and sandals in temperatures of six or seven degrees Celsius.”

Fitchel said that the collapse of the Syrian pound had doubled food prices three times, adding that the economic consequences of the Corona pandemic could not be mitigated.
He said many people could only cover half of what they needed as a minimum to survive.

Residents of the liberated northern Syrian camps suffered from tragic conditions in light of the bitter cold and floods that swept their camps, with a weak response to their suffering.