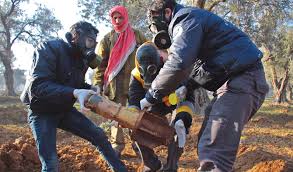 The deputy Russian representative to the United Nations, Dmitry Poliansky, said, “The attitudes of Western countries were particularly clear during the investigations into possible incidents of the use of chemical weapons in Syria.”

Poliansky added, “The Syrian government (the Assad regime) should not be accused of using chemical weapons, in the absence of sufficient evidence,” as he put it.

The Russian delegate also called on the Organization for the Prohibition of Weapons, “to pay attention to the United States itself and for the organization to submit a report on the progress in destroying the chemical arsenal that it possesses so far.”

On Wednesday, the United Nations General Assembly discussed a draft resolution on cooperation with the Organization for the Prohibition of Chemical Weapons in investigating the potential use of chemical weapons in Syria.

It is noteworthy that German intelligence submitted a report in 2013, in which it was stated that a contact took place between a senior official from the “Hezbollah” militia and the Iranian embassy in Beirut, during which the party official indicated that Bashar al-Assad was responsible for the attack and that he was “losing his temper.”