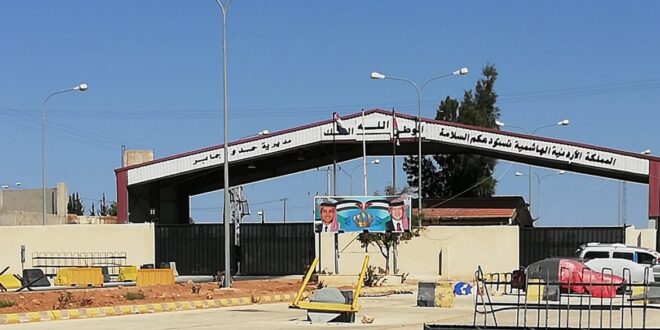 The Jordanian Ministry of Interior announced the reopening of two border crossings with Syria and the Kingdom of Saudi Arabia to travelers, nine months after they were closed due to the outbreak of the Coronavirus pandemic.

The official Jordanian News Agency, Petra, quoted a statement from the Ministry of Interior indicating that the land platform at the Jaber border center with Syria had begun, which corresponds to the Nassib crossing in Daraa governorate, with 150 people per day.

The Jordanian Interior Ministry announced the reopening of the Al-Omari border center with Saudi Arabia, at the rate of 200 people a day.

The Jordanian Interior Ministry statement stated that the reopening of the two crossings is subject to the approved health conditions, and comes with the aim of facilitating and simplifying the procedures, and the Ministry has also put an electronic link for registration in it.

On April 16, the Jordanian newspaper, Al-Dustour, reported that the Jordanian Prime Minister, Bishr Al-Khasawneh, agreed to the recommendation of the “Field and Border Crossings” committee to reopen the border crossings for the movement of trucks and travelers, while adhering to the health protocol.

The Jordanian authorities closed the Jaber and Al-Omari crossings in August of last year, after recording infections with the Corona virus among their workers.

The Jaber crossing was reopened in late 2018 for passengers and trucks, after the Assad regime took control of Daraa governorate under settlement agreements sponsored by Russia, after a closure that lasted about 3 years, during the revolutionary factions’ control of the area.

شاركها
السابق The Interim Government: Bashar Al-Assad released the perpetrators of serious crimes and left out those who were forcibly held in his prisons
التالي Germany provides financial support to Turkish companies that employ Syrians