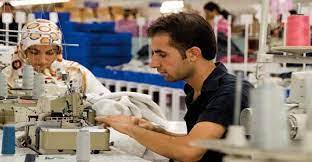 The German government has provided financial support to Turkish companies that employ Syrians, and companies that add Syrians to their employees will be able to receive a subsidy of 1,250 Turkish liras per month for every Syrian employee, according to the Turkish Hurriyet website.

The site stated that the support covers a total of 7,500 employees for a period of 6 months, and employers will be able to receive support payments for Syrian workers who will employ them, as well as Turkish citizens who are currently working or will be appointed, and each employer will be able to benefit from the incentives of the program, which will include 5 Syrian employees and 5 Turkish citizens .

The Turkish site stated that the registered employers in Gaziantep, Istanbul, Adana, Ankara, Aydin, Bursa, Izmir, Kahramanmaras, Kayseri, Konya, Manisa, Mersin, Osmaniye and anlıurfa will be able to apply for the facilities included in the German project via the SGK Internet address.

It explained that “employers who want to benefit from the support must employ employees without interruption, pay social security premiums, and not have any debts to the Social Security Institution.”

It pointed out that this European program covers 3,750 Syrian refugee workers or employees in Turkey, in addition to 3,750 Turkish citizens, meaning a total of 7,500 workers, half of whom are Syrians and half of them Turkish.
The support program will be granted to each employee, as it will include a monthly salary of 1250 Turkish liras for a period of 6 months, while those supported will receive other employment incentives that the Turkish state provides to workers.

The cost of a work permit for covered Syrian workers will also be covered of 3,750 employees, the cost of 503 TL will be paid by the program only once.
The program aims to encourage formal employment, encourage employers to fulfill social security obligations, as well as facilitate the access of Syrian refugees under temporary protection to Turkish labor markets and improve their skills and capabilities.